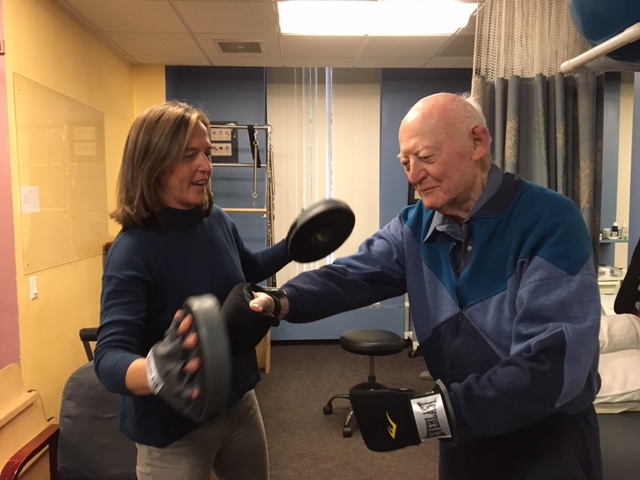 Parkinson’s disease (PD) is a progressive neurodegenerative disorder that affects movement. Common symptoms of this movement disorder include tremors, bradykinesia (slowness of movement), and postural rigidity and instability.  These manifestations can significantly affect one’s quality of life, and as the disease progresses, often these individuals become more sedentary due to mobility and balance problems. Evidence suggests that exercise, especially of a higher intensity, has some positive neuroregenerative effects, possibly slowing and delaying these impairments.

Boxing is a non-traditional exercise that has recently been gaining popularity with people with PD. Boxing incorporates whole-body movements, combining high-speed punching motions with trunk rotation and postural adjustments; motions that are often limited in PD.  Initiating movement is often difficult, but goal-directed movement is often easier, thus more automatic and fluid.  Furthermore, high amplitude motions such as with boxing facilitates these more automatic movements.  Boxing provides cardiovascular benefits, it's fun, challenging, and has been shown to improve function in individuals with PD.

A recent study investigated the effects of a 12 week boxing program for patients with PD.  The program consisted of group sessions that included stretching and strengthening exercises, in addition to a circuit regimen of endurance and punching activities. Positive outcomes in balance, endurance, gait, function, and quality of life were obtained following 12 weeks. These effects lasted for several weeks following cessation of the program regardless of how severe the
person’s initial impairments were.  This is encouraging as it shows the potential for improvements despite the progressive nature of this disease.

No prescription is needed to begin physical therapy treatment except for Medicare patients. Medicare does require prescription for a PT referral. All other insurances allow patients to be seen for 10 visits or one month without having a physician referral.

We are OPEN and treating patients in the clinic. For information on Virtual / Telehealh visits, click here -->
See More
X